More Info
Supply power and data to PoE devices such as IP Cameras or Wireless Access Points, giving you the ability to mount your PoE device virtually anywhere in a building and eliminating the need for a nearby power outlet and attached power supply. 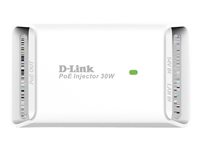 The IEEE 802.3at (PoE+)/802.3af (PoE) compliant DPE-301GI Gigabit PoE+ Injector is designed to supply data and up to 30 watts of power to PoE-enabled devices such as network cameras and wireless access points. Features: Offers a compact, powerful and cost-effective solution for PoE/PoE+ devices, giving you maximum deployment flexibility
Installed wireless access points and network video cameras on walls or ceilings where power outlets are not available
Plug-and-play installation makes setup simple, with no software or additional steps required, allowing you to get up and running right away

In Stock: Next Day
Next working day delivery to most UK Mainland postcodes on orders placed before 17:30 Monday to Friday. Additional charges may apply dependant on location, floor standing cabinets and other heavy/bulky items.
£32.24
£38.69 Inc Vat
Qty: Extend your network The DPE-302GE 2-Port Gigabit PoE Extender allows a Gigabit Power-over-Ethernet connection to be extended by up to 100 m per extender, to a massive maximum of 500 m in a daisy chain of extenders.1

Protected The extender has D-Link’s highest built-in 4kV surge protection, and is also capable of operating in temperatures of up to 60 °C (140 °F), allowing it to be deployed in harsher environments.


Ready to go Combined with three flexible methods of mounting: a powerful built-in magnet with anti-slip rubber feet, supplied screw anchors, and included velcro, the DPE-302GE is ready to use straight out of the box and can be deployed virtually anywhere.


With Networks in Mind   Designed to supply data, whether you need 10 to 1000 Mbps, and PoE power to devices such as IP surveillance cameras and wireless access points over extended distances.

Power to Devices Because the DPE-302GE is powered by consuming a very small fraction of PoE power, you can extend the connection distance beyond 100 m as well as power devices without worrying about finding a nearby power outlet, giving you the freedom to design your network layout.

The DPE-302GE 2-Port Gigabit PoE Extender allows a Gigabit Power-over-Ethernet connection to be extended up to 500 m. It is designed to supply data and PoE power to devices such as PTZ IP cameras or 802.11ac wireless access points over extended distances. With several mounting options, the DPE-302GE allows PoE devices to be deployed virtually anywhere over longer distances, eliminating the need for a nearby power outlet and attached power supply. Features: Plug-and-play with no software required
Multiple mounting options for flexible placement
Provides power over existing network cabling to remote PoE-capable devices
Lightweight and compact
One PoE input port to dual output ports
Three arrow LEDs to indicate the direction of the power and data flow
Deliver PoE (+) power over 10/100/1000 Mbps connections up to a 500 m
Connect and power Gigabit devices
Auto-negotiation on Ethernet ports
Full-rate network throughput
Compliant with IEEE 802.3af (PoE) and IEEE 802.3at (PoE+)
Compatible with all standard PoE devices
Regulates power output to avoid damaging the connected device
Withstands operating temperatures of up to 60 °C
Built-in 4 kV surge protection
Long range Power-over-Ethernet Exceed the physical limitation of traditional PoE connections by extending a PoE Ethernet connection over a distance of up to 500 m using multiple units.
Flexible placement Multiple mounting options with operating temperature of up to 60°C and no need for an external power supply.
Gigabit connectivity Connect and power PoE devices such as cameras and access points, with high-speed Gigabit connection, over long distances.
Powers more devices over longer distances The DPE-302GE offers a plug-and-play PoE solution, capable of transmitting up to 10 to 30 W of output power. It allows connection of up to two devices over a maximum distance of 500 m by daisy-chaining up to 4 units. With support for PoE/PoE+ and Gigabit speeds, the DPE-302GE is designed to be deployed in situations with high bandwidth requirements, over long distances.
Flexible deployment The DPE-302GE is powered by consuming only a very small fraction of PoE power. Combined with three flexible methods of mounting (built-in magnet, screw anchors, and Velcro), the DPE-302GE can be deployed virtually anywhere. This PoE solution frees network devices from the restrictions of power availability by removing the need for a local power source. The DPE-302GE has built-in 4 kV surge protection and is also capable of operating in temperatures of up to 60 °C (140 °F), allowing it to be deployed in harsher environments.
Reliable connectivity The DPE-302GE 2-Port Gigabit PoE Extender intelligently communicates the maximum available current with a Powered Device (PD). This protection feature keeps the device safe from damage by preventing it from powering on in case there is not enough current. This safety feature can also automatically disable the port in the event of an electrical short circuit.

In Stock: Next Day
Next working day delivery to most UK Mainland postcodes on orders placed before 17:30 Monday to Friday. Additional charges may apply dependant on location, floor standing cabinets and other heavy/bulky items.
£60.45
£72.54 Inc Vat
Qty: The DPE-301GS PoE splitter is used with end devices such as wireless access points, IP cameras and VoIP phones that don't natively support PoE, but rather require DC power input. It receives PoE power on a network cable from a PoE switch or midspan injector, and splits the Ethernet and DC power into two separate cables. One cable provides the DC power, and the other cable provides the Ethernet signal. The DPE-301GS PoE splitter has two 10 / 100 / 1000 RJ-45 ports. One port is for PoE input, which is the network connection and is usually connected to a remote PoE switch or injector. The other port is for LAN output, which is the connection that provides the Ethernet signal to the end device. Features: Converts incoming power from a PoE switch or injector to low-voltage DC power
Ideal for non-PoE access points, IP cameras and VoIP phones
Supports different voltage settings via selectable switch
Lightweight, compact and easy to install
10 / 100 / 1000 interface provides flexibility for different types of connections