As the gateway that seamlessly integrates into the Omada Software Defined Networking (SDN) platform, TL-R605 allows for remote and centralized management, anywhere, anytime. Standalone management via the Web UI or app is also available to maximize convenience.


Up to Four WAN Gigabit Ports to Optimize Bandwidth Usage

Three freely interchangeable ports that can be set to either WAN or LAN allow the router to support up to four WAN ports to satisfy various internet access requirements through one device. The multi-WAN Load Balancing function distributes data streams according to the bandwidth proportion of every WAN port to raise the utilization rate of multi-line broadband.


Easy Management with the Omada App

Follow configuration instructions on the free Omada app to get set up in minutes. Omada lets you configure settings, monitor the network status and manage clients, all from the convenience of a smart phone or tablet.

In Stock: Next Day
Next working day delivery to most UK Mainland postcodes on orders placed before 17:30 Monday to Friday. Additional charges may apply dependant on location, floor standing cabinets and other heavy/bulky items.
£35.68
£42.82 Inc Vat
Qty: 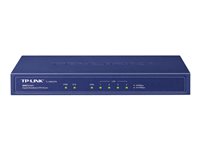 TL-R600VPN, TP-LINK's SafeStream Gigabit Broadband VPN Router, supports Gigabit Ethernet connections on both WAN and LAN ports which guarantee high-speed wired connectivity. What's more, it integrates multiple VPN protocols, high-security and high-performance VPN capabilities, which enable employees' remote connections to their main offices as secure as if they were in the main office. Besides, TL-R600VPN's abundant security strategies such as SPI Firewall, Dos Defense and IP-MAC Binding help protect your network against most known attacks. TL-R600VPN is an ideal partner for small offices, which need cost-effective and reliable VPN solutions. Features: High-security VPN capabilities
Abundant security features
Safety minded enterprise investments
High-security VPN capabilities TL-R600VPN supports IPsec and PPTP VPN protocols and can handle IPsec/PPTP/L2TP pass-through traffic as well. It also features a built-in hardware-based VPN engine allowing the router to support and manage up to 20 LAN-to-LAN IPsec and 16 PPTP VPN connections. Advanced VPN features include: DES/3DES/AES128/AES192/AES256 encryption, MD5/SHA1 authentication, Manual/IKE key management, and Main/Aggressive negotiation modes.
Abundant security features For defense against external threats, TL-R600VPN features SPI Firewall function. Additionally, it can automatically detect and block Denial of service (Dos) attacks such as TCP/UDP/ICMP Flooding, Ping of Death and other related threats. Moreover, this router provides IP/MAC/Domain name filtering functions, which forcefully prevent attacks from intruders and viruses. For applications such as FTP, TFTP, H.323 and RTSP which are not well compatible with NAT, TL-R600VPN offers administrators one-click enable of ALG choices corresponding to the above four mentioned applications.
Safety minded enterprise investments Professional lightning protection technology is designed to prevent electrical surges from penetrating the interior of the electrical equipment and is discharged harmlessly into the Earth. This router is designed to prevent lightning up to 4KV in well-grounded connection conditions. This feature ensures that networking infrastructure investments remain as safe as possible from one of mother nature's more violent situations.