In data communications, multimode fibre transmits digital signals using light. Groups of light rays, called modes, travel through the core of a multi-mode fibre optic cable. The light rays flow simultaneously but are dispersed along differing paths. Multimode fibre is designed for shorter distance transmissions than those on single mode fibre. When multimode fibre optic cable is used over longer lengths, distortion tends to occur on the receiving end, leading to a decrease in signal quality. Multimode operates at 850 and 1300 nm wavelengths. 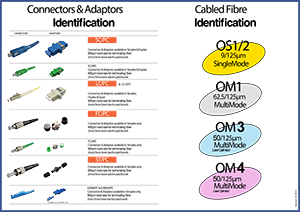 Common types of multimode fibre optic cable are used for data and AV on Local Area Networks. The multi-mode fibre core is larger than a single-mode core. Light moves down the core, which is covered in a material (cladding). The multimode optical fibre cable is designated as 50/125 or 62.5/125 (OM1). This defines the core to cladding diameter as 50 or 62.5 to 125 microns. Multimode fibre optic patch leads and bulk cable are both available.

In all the standards the OM/OS system applies to a cabled optical fibre.  The reason for this is obvious, the cabling standards deal with cables and connecting hardware both as products and “as installed”.Even though they call the OM/OS scheme “OF types”, ISO/IEC 11801 and 24702 make it clear that the designation OM1, OM2, OM3, OS1 and OS2 relate to cable transmission performance. For more information single mode fibre.

The BS EN 50173 series makes it even clearer by describing the OM/OS scheme as “optical fibre cable Categories”.

Both the IEC and EN committees have strengthened this relationship in the production of their cable standards listed below which contain references to OM1, OM2, OM3 and OS1: